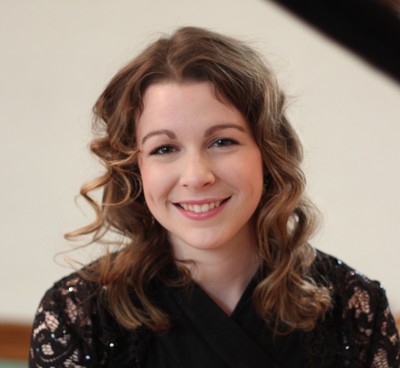 Amy is a piano instructor and performer in Concord, New Hampshire. She grew up in a very musical home and has been immersed in music her entire life. As a child, she enjoyed attending Gilbert & Sullivan operas with her family, and fell in love with classical music through repeated listening. She began piano lessons at age seven and started teaching when she was twelve. Since age fourteen she has played various venues in the Concord area, and has performed ten Beethoven sonatas and many works by Bach, Brahms, Chopin, Debussy, Haydn, Ligeti, Mendelssohn, Mozart, Rachmaninoff, Ravel, Schubert, and Schumann. In 2014, Amy performed Ravel’s La Valse at Steinert Hall in Boston, and in 2013 played a two-piano, four hands concert with her sister, Kara Comparetto, at the Concord Community Music School, which included Mozart’s sonata in D for two pianos, Brahms’ piano sonata in F minor for two pianos (the “Brahms Quintet”), and duet versions of several Gilbert & Sullivan overtures. She studied piano for ten years under Sara Whitehouse of Loudon, NH, and currently studies under Roxana Bajdechi Frizzi in Boston.

Amy sings with the Concord Chorale and studies music theory under William Fletcher of St. Paul’s School. She also plays the cello in the New Hampshire Philharmonic Orchestra and studies cello under Kate Jensik in Concord.